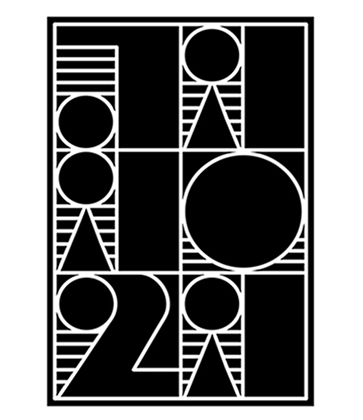 We have never been much to make a big deal out of landmark dates but this one caught us by surprise. In the second half 1999, the first edition of Arkitip was published making this year Arkitip’s 20th anniversary. To commemorate the occasion, we asked fellow Virgo and Arkitip alumni Aaron De La Cruz to design something truly unique. The result is a stunning 24 x 36 In. screen print that depicts a fresh and meaningful play on the numbers 1999 – 2019.

“SAS called me one day with a crazy idea for a print that would highlight the years 1999 and 2019 that didn’t make the anniversary obvious. It was funny because it took me a few hours just to decipher the chicken scratch he jotted down on a note. Being a fan of my numeric series he urged me to use it, and I was excited by the idea. We decided to keep it black and white (a nod at the first collaborative project we did together) and that was it. From there it was all about being balanced and clean; something we both appreciate, being extremely Virgo-esque.

I used 20 shapes in total to make up the numbers 19992019 concentrating on movement of the eye when writing out those numbers. My interpretation is using basic geometrical shapes and lines to do the same thing. For the layout, I created a visual path to follow that makes a sort of figure 8, so the numbers have a flow to them in order and not just shape. For the printing, I chose this beautiful black French licorice paper and the screen will be hit twice to increase the opacity. I’m excited to be working with Arkitip once again on this really special release.” – Aaron De La Cruz

Thank you for 20 years of support!