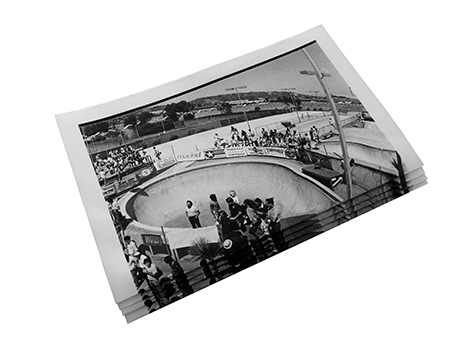 It is with great pride that we announce our second project with J. Grant Brittain. We’ve blown up the format to Newspaper size, perfect for thumb-tacking to your walls. This collection is replete with inspirational moments, in a size that befits their ingenuity.

While working at the Del Mar Skateboard Ranch in 1979 selling Cokes, Twinkies and miniature golf, J. Grant Brittain borrowed his roommate’s Canon and began what would become a 36 year-long affair with skateboarding, cameras and magazines. He helped found Transworld Skateboarding magazine in 1983 and as the Photo Editor for 20 years, helped build it into the top selling skateboarding mag. He has captured the best skateboarders of the last three decades in photos that have become classics. He has also taught some of the best skate photographers past and present and has helped them develop their own work. Grant felt like he was in a well worn rut and has moved on and helped start another magazine in 2003, The Skateboard Mag where he resides to this day.

His “off hours” are consumed by a search for calmer and more serene subjects. Still lakes at night and solitary desert forms are among the subjects of his diverse personal work. His abstracts, portraits, landscapes and travel images seem to draw from the opposite energy of his action shots. Few photographers have pursued so wide a range of subjects and styles. But few individuals find themselves so central to such an active community, where one’s perspective is just a notch askew of the rest, and where movement and progression is the norm. Grant Brittain’s body of work reflects his deep involvement in an emerging youth culture, as well as his escape from it.